The transatlantic slave trade consisted in the forced migration of enslaved African people mainly to the Americas. The slave trade existed from the 16th to the 19th centuries and regularly used the triangular trade route and its Middle Passage.

This page presents a series of digital artefacts that allows users to get a deeper understanding of the transatlantic slave trade and its magnitude. The artefacts found in this page are based on data from the Trans-Atlantic Slave Trade database, which is hosted by Emory University and contains data about more than 36,000 slaving expeditions.

Find below different artefacts, ranging from an interactive map with the paths of slave ships across the Atlantic to an informative and impactful video about the Middle Passage. 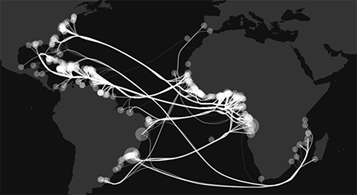